The Materials Engineering Laboratory (Lab) is responsible for and provides materials-related services for City and private development projects. 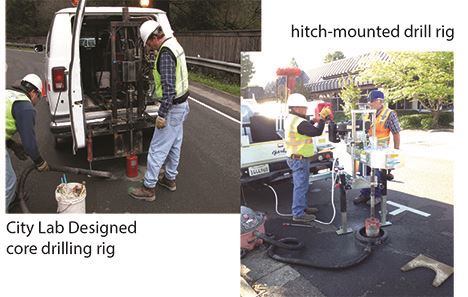 In 1972 the City Lab designed and built a drill rig, which was hydraulically-powered and mounted in a van. This drill rig provided us the capability of coring asphalt and Portland cement concrete pavement. This van-mounted drill rig was replaced in 2015, when we purchased hitch-mounted coring equipment. The hitch-mounted equipment allows us the flexibility of using the same Lab truck for project nuclear density gauge compaction testing of various materials when we are not needing to core for a project.

Pavement core samples are occasionally obtained on newly surfaced streets when there is a are concern about the pavement thickness and/or the properties of the pavement (e.g., density, strength, air voids, etc). The cores are brought back to the Lab, where the appropriate test(s) can be performed on the intact core sample and/or on re-constituted asphalt material after the cores are re-heated in our ovens.

During the design of CIP projects, existing streets are often cored to confirm their structural section. Based on the actual structural section of the streets undergoing rehabilitation, adjustments may be possible to the preliminary design to allow a more cost-effective pavement rehabilitation. An example of this service recently occurred on the Elizabeth Way Water and Sewer Capital Improvement Project. Instead of requiring a rebuild of the street with a typical 0.55’ full-depth asphalt section, we obtained two (2) core samples and determined the actual pavement was thicker than the historical plan reviews indicated. As such, the final pavement rehabilitation will consist of a new 0.37’ thick asphalt surfacing over a minimum of 0.38’ of existing aggregate base for an overall reduction in asphalt tonnage required for this project of ~33%.