The Southeast Greenway is a 57 acre area of undeveloped land, which was previously intended to be an extension of Highway 12.  The property, which is currently owned by the California Department of Transportation (Caltrans), follows a 1.9-mile linear path from Farmers Lane/Highway 12 to Spring Lake Regional Park (see aerial map below).

For additional information please see below. 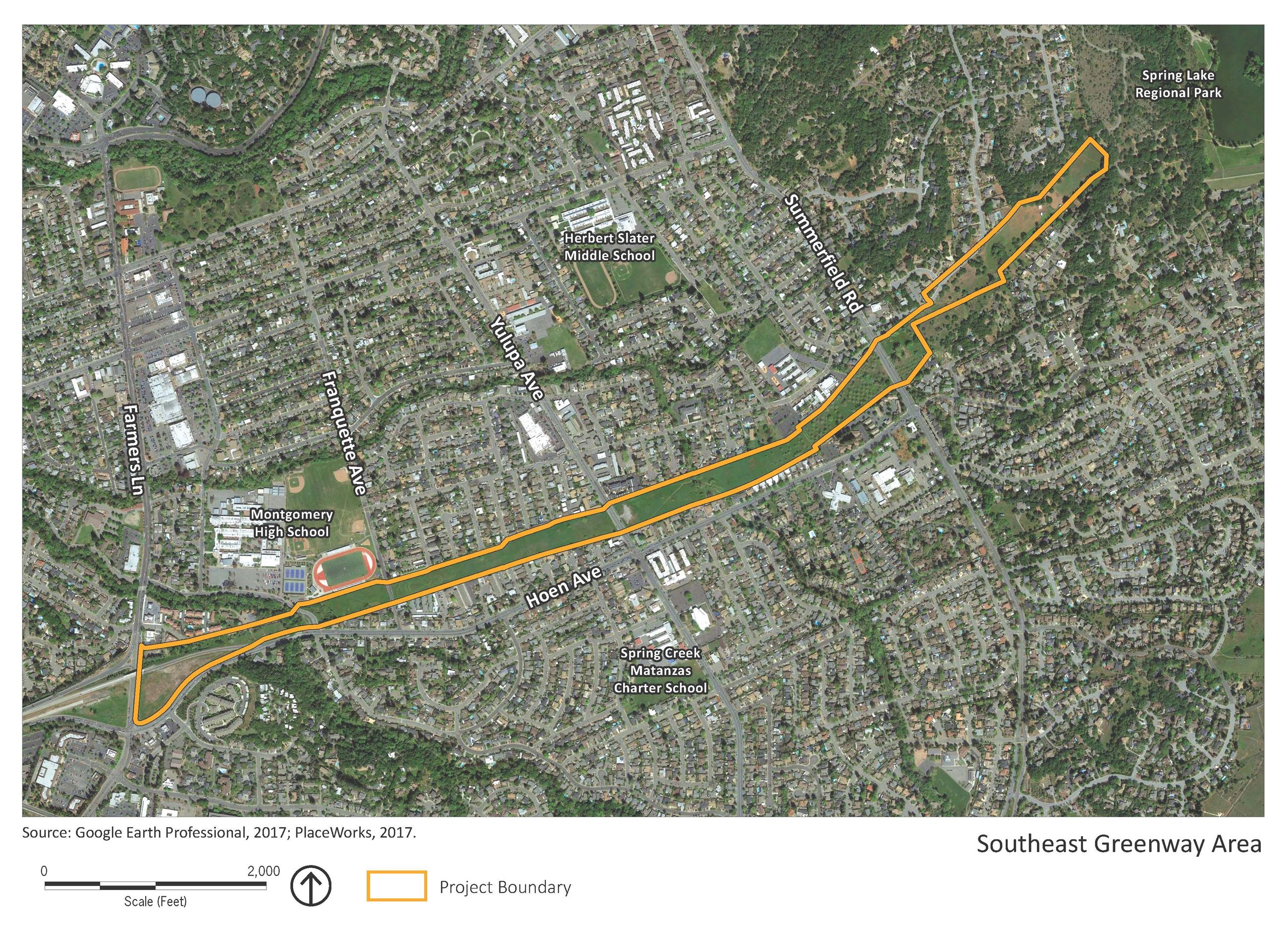 In 2009, the Southeast Greenway Community Partnership, including the City of Santa Rosa, Sonoma County Water Agency, Sonoma County Regional Parks, Sonoma Land Trust, LandPaths, and the Southeast Greenway Campaign, came together to plan for the acquisition of the 57 acres illustrated above.  The area, which is currently owned by the California Department of Transportation (Caltrans), spans a 1.9-mile linear path from Farmers Lane/Highway 12 to Spring Lake Regional Park.

The initial vision for the area, which was originally planned by Caltrans for a future extension of State Highway 12, was that the area between Summerfield Road and Spring Lake Regional Park would be transferred to the Sonoma County Water Agency and operated/maintained by Sonoma County Regional Parks.  The remaining land would be transferred to the City of Santa Rosa and would be operated and maintained by City’s Recreation and Parks Department with support from community members and nonprofit organizations.

On August 20, 2014, the California Transportation Commission adopted a resolution to rescind the freeway adoption due to lack of operational need, local support and funding, allowing the land to be transferred or sold.

In the fall of 2015, the City Council initiated a General Plan Amendment and Rezoning to designate land uses for the site.  Because the land was initially intended for a future extension of Highway 12, it currently does not have a General Plan land use designation or zoning district associated with it.  As part of the planning process, two community workshops were held, one in August 2016 and one in October 2016, to understand residents’ land use and circulation preferences for the site.

The Planning Commission and City Council held a joint study session in November 2016 to consider information from the workshops, along with draft guiding principles and three land use and circulation alternatives.  From the feedback provided at that session, along with input from the community workshops, community survey, and Technical Advisory and Partnership Committees, a Preferred Alternative was been developed (illustrated below).  The Preferred Alternative was considered by the Commission and Council in a second joint study session in March 2017.

The proposed Southeast Greenway project would establish General Plan land uses and associated zoning districts within the 57-acre area. Implementation and adoption of the project would result in new development potential of up to 47.2 acres of parks and recreational uses/open space, 244 multi-family housing units, and 12,000 square-feet of commercial space. No physical changes to the site are proposed at this time.

Project documents are provided below.

The City of Santa Rosa developed an Existing Conditions, Opportunities and Constraints Report to document existing conditions on the property and opportunities and constraints resulting from existing adopted plans. This report, provided in the links below, was completed and presented to the City Council in October 2015.

On August 6, 2016, the first community workshop was held for the Southeast Greenway project, with participants envisioning desired uses on the site.  On October 8, 2016, the second community workshop was held for participants to consider and provide feedback regarding draft guiding principles and three land use and circulation alternatives. Summaries of the workshops, as well as a summary of a survey that was conducted in 2016, are provided below.

Land Use and Circulation Alternatives

Based on the input provided by the technical advisory committee, community members, survey responses, and elected officials, three alternatives were developed for consideration, which are described in the documents below.

Land Use and Circulation Alternatives Memo

Preferred Land Use and Circulation Alternative

On August 21, 2017 the Draft Environmental Impact Report (EIR) was released for a 45-day public review.  The Draft EIR analyzes the potential impacts of the proposed project, which includes proposed General Plan land use designations for the 57 acres, as well as implementing zoning districts, and proposed text amendments to the General Plan and Zoning Code that would support the community vision.

Below are links to the Draft EIR:

During the initial Draft EIR public review period, which ended on October 4, 2017, the City received comments identifying concerns regarding the traffic analysis. Specifically, the Draft EIR provides analysis of the proposed project’s future traffic impacts assuming that the Farmers Lane extension is completed prior to completion of the Southeast Greenway area.  Although the extension of Farmers Lane is a long-term project, because it is identified in the Santa Rosa General Plan as a future roadway, the EIR analysis must identify it and consider the project impacts as if the extension is complete. However, because of the long-term nature of the extension, the comments stated that review of the potential project impacts without the Farmers Lane extension must also be completed.

The additional traffic analysis was completed and a Revised Draft EIR was prepared, focusing on two sections, the Transportation and Circulation section and the Noise section.  The revisions include new analysis of potential future impacts of the project without the Farmers Lane extension.

A link to the Revised Draft EIR is provided below:

Below are links to the Final EIR: