Connect to the SMART Train

CityBus has ten (10) buses per hour traveling between the Transit Mall and the Downtown SMART Station on weekdays. There are three bus stops near the Downtown train station, all accessible via a pedestrian path next to the tracks. Catch routes 2, 2B, 6, 9, and 12 in either direction between the train station and the Transit Mall and Garage 12.  To plan, pay and track your trip, see these options.

CityBus route 15 stops at the Santa Rosa North SMART station.  Also this train station is a seven minute walk from the Coddingtown Transit Hub, which is served by CityBus routes 1, 6, 10, and 15 and Sonoma County Transit Route 44/48.  Connections to Mendocino Avenue, Downtown Santa Rosa, and many other destinations throughout Santa Rosa can be made at the Coddingtown Transit Hub.  To plan, pay, and track your trip, see these options.

Fare Discount When Transferring from CityBus to SMART Train

With a Clipper Card you get a train fare discount equal to the amount of your bus fare when transferring from a CityBus to a SMART train, and vice versa.

There is now a discounted parking permit for commuters who regularly use public transportation. The permit is for Garage 12 and costs $31/month—a 50% discount from the regular permit rate. 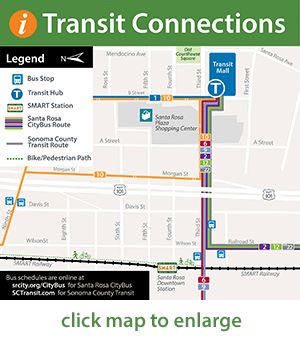 CityBus service to the SMART station is provided via Third Street, one block away from the SMART platform.

From Downtown Transit Mall to the SMART station 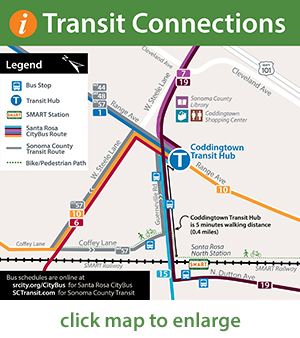