Chief O’Neal was a native of Montana and came to Santa Rosa via Spokane, Washington. He joined the Police Department in March 1925 during the term of Chief George Matthews.

Upon the sudden death of Chief Matthews in 1928, the City Council looked first to Captain Herman Hankel, a 37 year veteran of the department, as the logical successor. Captain Hankel elected not to accept the position. The Council then looked to 33 year old Charles O’Neal. Though with the department for only 3 years, Chief O’Neal had proven his ability as a police officer. He was appointed Chief of Police in May 1928.

Chief O’Neal holds the tragic place in the department’s history as being the first Santa Rosa officer killed in the line of duty. Chief O’Neal was gunned down in his office by Al Chamberlain on July 15, 1935, for retaliatory reasons. He died at the age of 39, ending a promising and productive career. 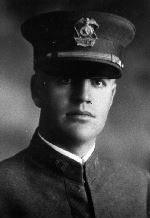