By Gaye Lebaron, The Press Democrat

The first time the kid from Mendocino appeared at the Santa Rosa police station to inquire about the prospects for employment, he was just 20 years old.

The police chief, the legendary Dutch Flohr, told him to “join the Army and get some whiskers” and then come back and he’d give him a job. 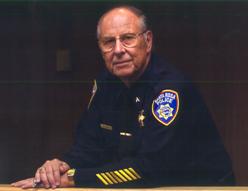 The young man had always been good at following orders. And Dutch was a man to be obeyed.

He enlisted. When he was discharged, the chief was as good as his word. In July of 1963, age 23, our hero was in uniform, walking patrol on the midnight shift among the two dozen saloons and cheap hotels in downtown Santa Rosa.

Next month, exactly 40 years later, Commander Rodney Sverko will retire from the longest tenure in the history of the Santa Rosa Police Department.

Sverko's departure will leave a discernible void in Santa Rosa law enforcement. He's more than the "institutional memory" of the department, having worked through three chiefs, two "systems" and a population change of some 100,000 people in the city.

When I asked Janice Maynard, the department's administrative assistant, which of Sverko's four commander colleagues I should talk to, who would miss him the most, she replied, "All of them," without a moment's hesitation. "Everybody's going to miss him a lot!"

Indeed, when "Smokey," as he is generally known, unpins that badge it will be a day for law enforcement, the press and the many citizens of Santa Rosa who have come to know this man to consider their loss at the same time they wish him a long and happy freedom from his duties.

Smokey is a fifth-generation North Coaster. His late mother, Margaret White Sverko, was the great-granddaughter of Augustus Redemeyer, who founded the Savings Bank of Mendocino County in 1903. His father, Dave Sverko, a rancher and a logger, was born in Fort Bragg and still lives in the family home in Mendocino.

When he graduated from Mendocino High School in 1957, Smokey intended to become an FBI agent. "In those days you had to be either an accountant or a lawyer to be in the bureau," he said, "so I came to Santa Rosa Junior College to study business administration and become a CPA."

The following year marked the addition of Stan Anderson to the SRJC faculty and the start of the college's Administration of Justice program. Smokey enrolled and became the first captain of the uniformed campus police. The class contained several future peace officers, including now-retired Undersheriff Dale Moore.

The campus police worked closely with SRPD and Smokey came to know the officers, including Lt. Carl Meister and Buck Relyea and Bill Clark and particularly the two motorcycle officers, Wally Stephens and Nils Olsen, who worked off-duty hours writing parking tickets on the college campus.

His association with these men convinced him that local law enforcement was the career he wanted.

It was a happy decision for Santa Rosans. Ask anybody. You can even ask the press, which has, in recent years, played a kind of cat-and-mouse game with police. Smokey has been the go-to guy for the past decade. In a spot check of The Press Democrat's electronic files, I stopped counting when I got to 85 news stories that quoted Cmdr. Sverko with the official word on any number of things -- crimes, demonstrations, traffic accidents, whatever falls within the police purview.

Any reporter can tell you Smokey is the one who always returns the phone calls, even calling to alert the newspaper or the TV and radio news people when something is going on. And, from Smokey, there's no question about trust. As Press Democrat Executive Editor Catherine Barnett put it: "When you call about what's happening at midnight and Smokey says it's nothing, you know that it's nothing, that you won't find out the next day that the streets ran with blood."

In 1968, he made sergeant, 28 years old, taking the first written test for that rank in the city's history and supervising men much older than he. He became an administrative sergeant in 1971 and wrote the "10 plan" (four days a week, 10 hours a day) and devised a system for rotating sergeants' shifts which is still in use. "When I made lieutenant, I went back to the streets," he said. His job then was mostly in training new patrol officers.

"When (Chief Sal) Rosano came in, he brought his own people and a new vision of police work, very organized. We were grandfathered in as commanders." In the past dozen years, he's been the most visible link with the community, in charge of not only media communications but the policing of special events, moviemaking sites, markets, parades, the fairs. In that capacity, he has met literally hundreds of people, introducing them to the side of law enforcement that depends more on conversation than confrontation.

Carl Meister, who retired as a lieutenant in the 1960s to become chief special agent for Wells Fargo Bank, lives in Davis now. He points out, with pride, that he was instrumental in getting Smokey that job on the force 40 years ago. "I was with him when Dutch interviewed him," he says, remembering the young Sverko as "very quiet, reserved, very smooth. You could tell he'd be a good man to have with you."

Walt Gesek, who retired as assistant chief, was on Smokey's oral exam board. "I have all greatest respect for him," says Gesek. Both he and Meister, with many others, are planning to be there when he's honored for his service. There won't, however, be a party especially for Smokey Sverko. He doesn't want one. He chooses to be honored in August with the other police department retirees. But we couldn't let him walk off the beat without a sit-down to talk about the old days.

It's unusual to be something of a relic at age 63, but because he started so young, Smokey has achieved that status. Because he's got a sense of history and a sense of humor, the telling of the old stories comes easily.

On the Job Stories

He talks about those first months on the job, about the midnight foot patrol, about the days directing traffic at Fourth and Mendocino, where "Pepper (the town character) initiated me." He remembers walking handcuffed prisoners across Hinton Avenue to court. He talks about the days before the foot patrol officers had portable radios. "If we heard a siren, we would call the station. Lots of times the dispatcher, Deke Huntington, would say 'I'm busy' and hang up, leaving us standing there."

A patrol officer in trouble would throw his hat into the middle of the street, hoping one of the two Yellow cabbies in town would see it. They knew it was a signal to call the station and tell them, "You've got an officer who needs help."

But, even from car radios, calling for backup in the Chief Flohr days was "almost nonexistent," said Smokey. "A sergeant would show up and ask you why you couldn't handle it." Bob Landolfi was his partner. "We'd walk up Fourth Street, one on each side, signalling each other with our flashlights," said Landolfi, who retired in '79 and lives in Oklahoma.

They were partners in the detective unit, too, and are lifelong friends. "I told him he should go for chief, so he could hit all the ranks," said Landolfi. "He would have made a helluva chief."

So Now, history and nostalgia having been served, Smokey will talk some about change, about "drugs being the single worst thing that has happened to our country," about the disappearance of respect for parents, for all authority.

"We've lost a lot as the town has grown, lost the feeling of knowing people. The family element has changed so much. If we told a kid to go home, he'd do it. Now, if you pick a kid up at 3 a.m. at Courthouse Square and call his parents, they come and get him and drop him off in the square again."

He's planning now to refocus his life. He and his wife, Bev (he married the former Beverly Marshall of Forestville in 1961) have two daughters, two grandsons and a summer home in Placer County. He smiles, contemplating leisure time with all of the above.

While some of his conclusions may sound negative, the positive fellow that he is comes through. Like what he's learned in nearly 50 years of police work, counting from junior college days. "I've learned that we are rated by the community for the little things, not the big things. Dutch hired people to help people. He expected all of us to help people like he did."

Smokey has always helped people. His partner, Landolfi, who's already got a plane ticket to attend the retirement dinner, summed it up. "He's a caring man," he said. "Santa Rosa is losing one helluvan officer. He's the best man I know."

While there's general agreement that no one can replace Smokey, one can be sure that all those officers he trained were made to understand that caring was part of the job, the biggest part. A good cop like Smokey doesn't go away. He leaves a legacy.

Gaye Lebaron writes about Rodney "Smokey" Sverko, the 40-year SRPD officer and gentleman who'll retire soon, along with badge Nnumber 1. Let me add my favorite of his stories.

In 1958, Smokey, then 18, was attending SRJC and living in an old house at Mendocino and Ridgway. Through a window he saw a frantic Santa Rosa cop dance and dodge around his police motorcycle. Its engine was spewing flames. Smokey watched, jaw agape, as Officer Niles Olsen grabbed the radio microphone, only to have the cord burn in two. Nils then ran to Smokey's back door and banged. "He says, 'Call the Fire Department!' I say, 'I don't have a phone.' He says, "Then get a hose!' I say, 'I don't have a hose.' He says, 'Well for God's sake do something!'" So Smokey raced up Ridgway, knocking on doors until he found someone who called the Fire Department. By the time an engine arrived the Harley was a cinder.

The next time Niles saw the ever-so-helpful kid was five years later, at the police station. Smokey was wearing a brand-new police uniform. "I couldn't believe it," Nils said from his retirement home near Palm Springs. The two of them have been tight friends for 40 years now.
Meetings & Agendas
Community Empowerment
Service Requests
& Questions
Recreation Activities
Open Data Portal
[]