The Santa Rosa Fire Department was established on February 12, 1861 as a volunteer organization. In January of 1894 (with a city population of 5,500) the Department transitioned to a paid organization, built its first fire station at 5th and Mendocino in the early 1900s, and has since grown with the City to its current size of nine fire stations and 133 employees. Improvements in equipment and training allow the Fire Department to keep pace with a growing volume of calls, many of which require specialized tools, techniques or knowledge.

On April 18, 1906 an earthquake destroyed most of Santa Rosa, doing more damage proportionately than was done in San Francisco. The Fire Department had ten full time and seven paid/on call employees, serving a population of about 7,000. By 1910 there were 7817 residents in Santa Rosa, a number that rose to 8,758 by 1920. By 1945 the population was 18,000 and Fire Department employees numbered 26. In 1959 there were 41 employees working out of three stations, serving a population of about 33,000.

In the summer of 1964 a huge brush fire burned 52,000 acres and over 300 buildings in Sonoma, Napa and Solano counties. Progress of the fire into Santa Rosa was stopped in the area of Sutter Hospital with the help of mutual aid from the greater Bay area.

Another large earthquake in 1969 damaged or destroyed many of Santa Rosa's most important buildings. At that time, the SRFD had 63 firefighters working out of four fire stations serving 49,000 residents. Between 1969 and 1982 three more stations were built. In 1982 the population had climbed to 87,000 and the Fire Department had 88 employees.

The Department's strength increased to 100 in 1983 with the addition of the Roseland Fire Protection District to the SRFD. The Local Agency Formation Committee required Santa Rosa to provide fire protection to the District after annexing a significant portion of their revenue base. The population had increased to 113,313 by 1990.

Responding to OSHA safety regulations, the City added two additional companies in 2001. This brought total staffing in the Santa Rosa Fire Department to 129 personnel serving 141,989 residents. In 2002 six more firefighters were hired, and the paramedic program was started. Total staffing rose to 135 personnel. Confronted by budget shortfalls in 2003 the City Council reduced staffing by two positions, leaving 133 employees to protect 160,329 residents. By 2004 the number of residents rose to 170,000.

The passage of Measure O in November, 2004 by the citizens of Santa Rosa continues to assist the City in constructing new, much needed fire stations, and adding the additional personnel and equipment necessary for the Fire Department to continue to provide high quality emergency services to our growing community.

In 2006 Santa Rosa Fire Department opened Fire Station 10, the 9th fire station. Station 10 is located in the South West corner of the City off of Corporate Center Parkway and was built in response to growth, both residential and commercial development in that area.

In 2009 Station 11 opened on Lewis Road, near the Junior College neighborhood to address increasing call volume and in anticipation of the relocation of Fire Station 5 to provide an enhancement to the wildland urban interface areas of Northern Santa Rosa. Station 11 is currently housed in a modular building. A permanent fire station building is planned for a future date.

As of 2017, the Santa Rosa Fire Department serves a population of approximately 175,000 residents and responds to over 26,000 calls for service each year. We currently serve our community from 10 fire stations housing 10 fire engines, 2 ladder trucks and 1 Battalion Chief. Our Administration located adjacent to Fire Station 10 and supports Fire Operations and Fire Prevention. 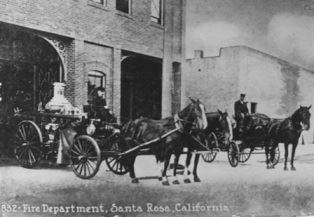