If you suspect gang activity in your neighborhood or school or suspect your child may be involved in gang activity, please call 707-543-GANG. If it is an emergency, call 911.If you happen to see an officer in your neighborhood, notify him or her of the problem. The only way to combat the gang problem is to work together. Visit Gang Awareness for more information. 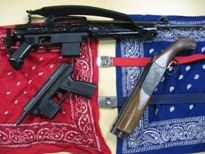 What Gang Crime Detectives Do

Detectives assigned to the Gang Crime Team accomplish their mission in a number of ways. They patrol the City in plain white or black patrol cars, focusing their enforcement efforts on gang activity. They also conduct comprehensive investigations of gang related crimes of all types. The team works closely with outside police agencies, including the Sonoma County Sheriff's Office, Sonoma County District Attorney's Office, Adult and Juvenile Probation, and the Federal Bureau of Investigation. The members of the Gang Crime Team also participate in the Mayor’s Gang Prevention Task Force and support the gang prevention and intervention efforts taking place in the City of Santa Rosa.

Definition of a Gang

A criminal street gang is any group of three or more persons with a common sign, name or symbol, who engage in a pattern of criminal gang activity. The crimes are done to benefit or further the gang, or are directed by the gang.

It is not against the law to belong to a gang. However, when a gang member participates in a gang related crime he or she can be charged with an enhancement that adds additional prison time to the original offense. To reduce gang violence, graffiti and illegal drug use in California, the Attorney General, the Legislature and the Governor have worked together to enact new laws specifically aimed at gangs. These laws assist law enforcement agencies, district attorneys, judges, schools, and communities in mounting a comprehensive attack on the problem. The Criminal Street Terrorism Enforcement and Prevention Act eradicates criminal activity by focusing upon criminal gang activity and the organized nature of street gangs.