The City of Santa Rosa, in conjunction with Nissan of Santa Rosa, commissioned Artists Mark Grieve and Ilana Spector to create a dynamic artwork for the Santa Rosa corridor, located at Santa Rosa Avenue and South A Street in Santa Rosa. The Work, entitled, "Cyclisk," is a 60-foot-high (5-story) Egyptian-style obelisk made from recycled bicycles.

The City's Art and Culture Element in the General Plan 2020 calls for creating inspiring places for the residents and visitors of Santa Rosa. This public art project contributes to these goals as well as the Redevelopment Plan and the Downtown Arts District. The project site was identified because of its proximity to the Nissan of Santa Rosa auto dealership, who funded the project. This site also acts as a gateway to the Santa Rosa Arts District from the south and will complement the Ned Kahn project at the West 3rd Street entrance, and the Boback Emad project at Mendocino and College Avenue. 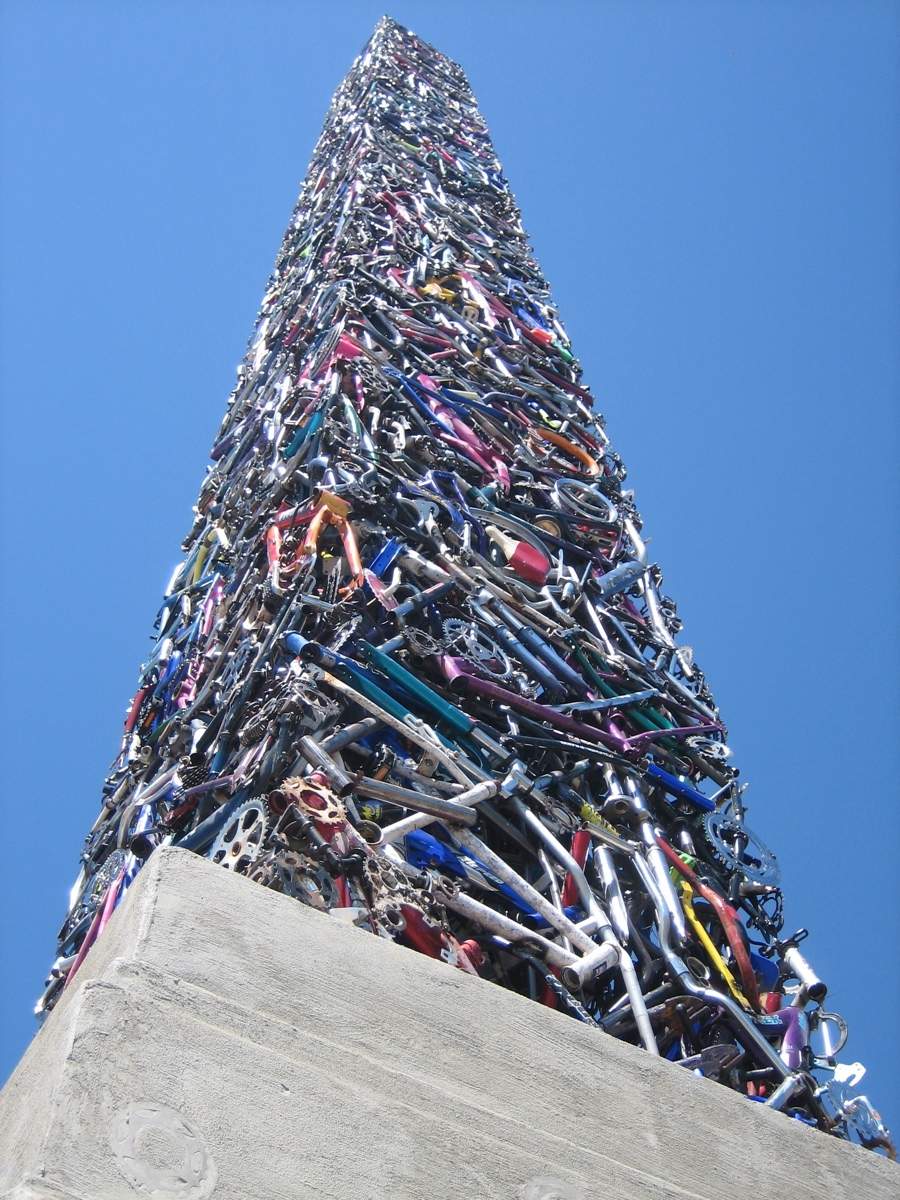 The project budget was $37,000 and included expenses related to design development, engineering, collecting and disassembling bike parts from nonprofit bike bicycle groups, insurance, fabrication, special inspections, transportation, installation of the artwork, and all other project-related expenses. The project was funded by Nissan of Santa Rosa to fulfill their "1% for Art" requirement.

Working within the budget, Grieve and Spector chose not take an artist fee in order to create the necessary scale required for such a work. Architect Daniel Strening and ZFA Engineering also donated time to bring the landmark monument to Santa Rosa. The bicycles were collected from various local nonprofit community bike programs. "Community Bikes in Santa Rosa, Trips for Kids/Recyclery in San Rafael, Bici Centro in Santa Barbara, as well as individual donors formed integral partnerships, providing needed material and excitement to bring the project to fruition," explained Spector.

The artist selection process was open to practicing, professional artists residing in California's North Bay Area. A "Request for Qualifications" was issued, and an Artist Selection Panel was formed, consisting of arts professionals, representatives from the City's Design Review Board, the landowner and community members. We would like to thank the following people for their assistance with this project: Lawrence Amaturo - Nissan of Santa Rosa; Harvey Charnofsky - Arts Council of Sonoma County; Kristina de la Valle - A New Leaf Gallery; Cherie Gunnell - Neighborhood Representative; Edwin Hamilton - Artist; Steve Rabinowitsh - Art in Public Places Committee; and Daniel Strening/Warren Hedgpeth - Design Review Board.

The Selection Panel identified a short list of three artist/artist teams: Mark Grieve and Ilana Spector, Judson King Smith, and Michael Hayden and Kristina Lucas. These artists were invited to submit a specific proposal, which were presented to the Selection Panel and put on display for one month in the Santa Rosa Plaza Mall for public comment. After careful deliberation and consideration of the selection criteria, the selection panel nominated Mark Grieve and Ilana Spector as the winning artist team. Their recommendation was approved by both the Art in Public Places Committee and the Santa Rosa City Council.

"Made of recycled bicycle gears, rims, frames and hoops, [Cyclisk] will be a series of intersecting rhythms - a visual metaphor for the human experience - technology and the humanities - history and the future - individual and collective. Evoking a ‘world of possibilities,' it will be a work communicating to all walks of life - all ages, relevant for years to come...."

"When we looked at the spot, it seemed like something tall was needed on this odd little shape of land in Santa Rosa. That got me thinking about the Circus Maximus," Grieve explained. "At the end of Santa Rosa Avenue, it felt like a visual turning point on the road. We want to add to Santa Rosa a visual landmark that would have enough presence to compete visually with the surrounding environment."

Spector added, "Collecting unusable parts from the debris piles of nonprofit community bike projects has proven to be a win-win; community bike DIY places are thrilled unusable parts are not becoming land fill and the City is psyched the sculpture will solidify Santa Rosa as bike-friendly."

Local artist Mark Grieve, born 1965, started drawing in 1966 (primarily abstract for the first few years), until his formal education at the San Francisco Art Institute and the College of Marin, where under a series of excellent instructors, he learned painting, drawing and ceramics. His exhibition history is varied, starting with gallery settings in the 1990s, evolving to large-scale combustible temporary art, to most recently, creating public sculpture. A recent recipient of a Pollock-Krasner Foundation and Puffin Foundation grants, if you would like more information, feel free to look at Mark's website.