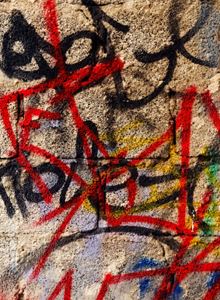 The City's Graffiti Abatement Program (GAP) has been evolving since 1993. Graffiti vandalism costs the City hundreds of thousands of dollars per year and causes private property owners immeasurable financial and emotional burdens.

The Santa Rosa Police Department assumed a greater deal of responsibility for the GAP in August 2006. Our program's focus is on:

By working closely with other affected City departments, volunteers, neighborhood associations, and schools, we are committed to making Santa Rosa a safer and more beautiful place to live. We work closely with officers to build strong cases against prolific graffiti vandals and warehouse essential graffiti-related information. We give educational presentations to students, law enforcement personnel, community organizations, and City staff.

An example of our early success was a proactive investigation in which we worked with the School Resource Officers to arrest a prolific graffiti tagger who was suspected of more than 300 acts of vandalism. After serving simultaneous search warrants in various locations, we were able to make an important arrest that sent a message to the community that vandalism will not be tolerated in Santa Rosa.

The City of Santa Rosa takes a pro-active approach to graffiti abatement. As "tagging" and gang graffiti has escalated, so too has the City's efforts to eliminate it.

The Police, Public Works, and Parks Departments work collaboratively to address graffiti vandalism through abatement, education, and enforcement. It is hoped that through the efforts of the City staff, property owners, and effective enforcement of Graffiti Abatement Ordinance 3729 (PDF), graffiti will be limited throughout the City of Santa Rosa.
View All
/FAQ.aspx
/QuickLinks.aspx